Ken Schweizer elected to the Academy of Arts and Sciences 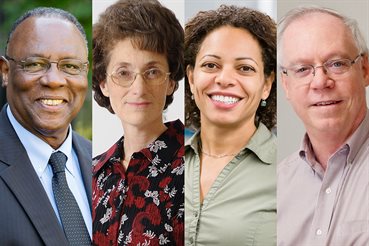 CHAMPAIGN, Ill. — University of Illinois Urbana-Champaign College of Education Dean James Anderson, physics professor Nadya Mason,  chemistry professor Nancy Makri and materials science professor Kenneth Schweizer have been elected to the American Academy of Arts and Sciences , one of the oldest honor societies in the nation.

They are among 252 new members elected to the academy this year, including artists, scholars, scientists and leaders in the public, nonprofit and private sectors.

Schweizer has been the chair of the American Physical Society Division of Polymer Physics and associate director of the National Science   Foundation Nanoscale Science and Engineering Center for Directed Assembly. Among his numerous awards are the American Physical Society Polymer Physics Prize, John H. Dillon Medal and Fellowship, Hildebrand Award in the Theoretical and Experimental Chemistry of Liquids of the American Chemical Society, the Everitt Award for Teaching Excellence, the Drucker Eminent Faculty Award and the Department of Energy Award for Outstanding Scientific Achievement in Materials Chemistry.

The American Academy of Arts and Sciences was founded in 1780 by John Adams, John Hancock and others who believed the new republic should honor exceptionally accomplished individuals and engage them in advancing the public good.

“We are honoring the excellence of these individuals, celebrating what they have achieved so far and imagining what they will continue to accomplish,” said David Oxtoby, the president of the American Academy. “The past year has been replete with evidence of how things can get worse; this is an opportunity to illuminate the importance of art, ideas, knowledge and leadership that can make a better world.”