A force to be reckoned with: Hoffmann earns APS' David Adler Lectureship Award 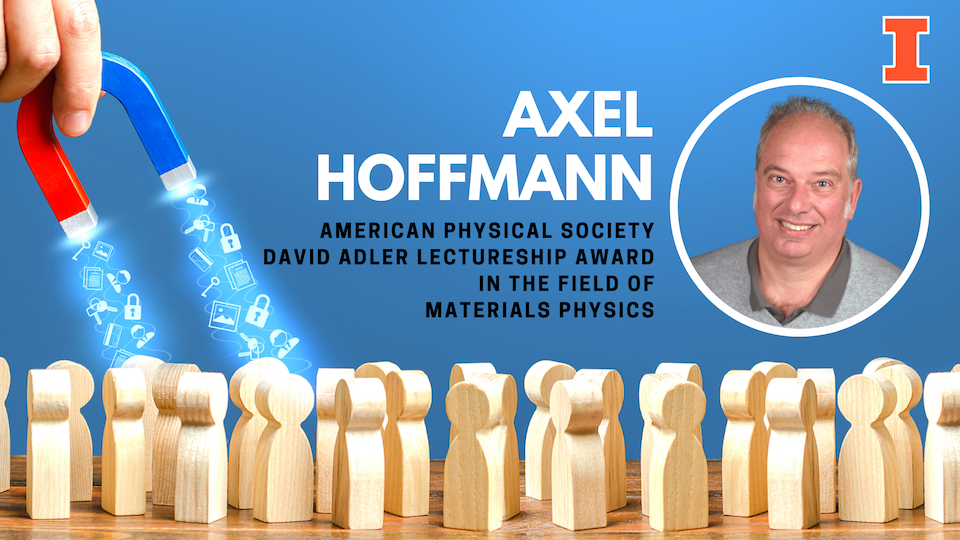 URBANA — Axel Hoffmann is the American Physical Society’s 2022 recipient of the David Adler Lectureship Award in the Field of Materials Physics.

Such an honor “floored” the University of Illinois Urbana-Champaign Department of Materials Science and Engineering Founder Professor in Engineering.

Hoffmann is being recognized for his extraordinary contributions to the field of materials physics along with his notable research, review articles and lecturing.

“If I look at the people (who) have received this award previously, it’s lots of folks that I highly respect, look up to,” he said, “so to be included in the same list is really humbling.”

Two standouts on the list include Samuel Bader, Hoffmann’s former advisor at Argonne National Laboratory, who nominated him for the award, and Ivan Schuller, his Ph.D. advisor and current distinguished professor at the University of California San Diego’s Department of Physics.

“I look at the people (on the list), and many of them shaped the way we approach materials (and) physics in major ways,” he said.

Hoffmann lends credit to this achievement to his many former young collaborators and current MatSE students, who are “really influential” in steering his magnetic research in the right direction.

For more than a decade, Hoffmann’s been a force in magnetic information, exploring how it propagates in electric materials and how to manipulate magnetism in novel ways.

Ultimately this work addresses the management of the ever-increasing demand for digital data, such as in cloud storage.

When it comes to cellphones and cloud storage, Hoffmann says “when you talk to your phone and hope to get a reasonable answer, really, you’re just talking to billions of magnets somewhere.”

Much of Hoffmann’s efforts take charge in one area in particular — communication.

“A lot of the work that we’ve been doing is really related to how one can communicate magnetic information,” Hoffmann said. “(That’s) really very central to information technologies because, essentially, virtually all the long-term storage of information of data happens these days in magnetic materials.”

Perhaps Hoffmann’s biggest question these days is how best to store information easily without requiring a ton of energy to maintain it.

“The question is: Can we push this (storage) towards much faster timescales, where we are using magnetic information at much faster times, like directly in a computer memory,” Hoffmann said. “Can we manipulate magnetic states efficiently at these fast timescales?”

The Hoffmann Research Group, a group of MatSE students located at the U of I’s Materials Research Lab exploring design rules and fundamental physics for functional magnetic materials and devices, is dedicated to answering such questions and making every-day conveniences like cloud storage possible.

But that’s not all Hoffmann hopes to pass on to the next generation of Grainger College of Engineering engineers.

“Part of what you want at the university is that you demonstrate that you clearly communicate the things you’re doing,” he said. “It’s not that you’ve just done really good science, but that you also helped communicate it well to the community.”